the shoemaker who listened to Mozart and arias 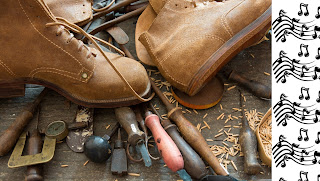 Somewhere in the year one thousand nine hundred and eighty-three, in the middle of the month of June, I had gone to get my daughter's sandals from the shoemaker. It was a minor repair. The shoemaker's shop was at the beginning of Odysseas Androutsos Street, at the point where it intersects Rozakis - Aggelis Street, both streets located in the center of the city of Lamia. The few shops located in this alley were old constructions, which of course over the years had lost their identity and their original style due to the renewal of a door or the addition of other materials later. All this, they give their image a kitsch image character and were reminiscent of slums in Rio de Janeiro, the famous "favelas".

In one of these small shops, the shoemaker was buried, having in front of him a small table with small partitions, where existed various sizes of nails, several types of hammers, glues, strings and other objects useful for his work, as well as skins which were scattered on the floor or in various parts of the shoemaker's shop.

Next to it, on the one hand, were thrown messy I can say, shoes for repair and repaired shoes on the other. These were on the shelves ready, waiting for their owner. The smells in the shop were mixed, but that of the twine with the candle prevailed.

This wonderful setting was accompanied by music. A small old tape recorder with Italian arias written on the tapes, spread a musical feast that covered every inch of the small shop. Mental euphoria and restrained enthusiasm were reflected in the shoemaker's face. Arabelos was his name. He seemed happy, almost happy, that is, he was in tune with the musical atmosphere.

As I entered the shoemaker's shop, I saw a lady standing in front of the shoemaker, waiting to pick up her repaired shoes; until the lady was served, I was enjoying Amadeus Mozart listening to the small tape recorder.

Maybe it was a way for the waiting customer not to get upset, I thought. As soon as the lady left, she politely apologized to me for the delay and immediately set out to serve me. Then I asked him how much he enjoys this opera. He hesitated for a few seconds, looked at me curiously from head to toe, and slowly started wrapped my daughter's shoes.

When I asked him to tell me the amount I owed him, he replied that he was not doing anything.

- For what reason, I told him.

- Because, sir, I have been working for so many years, no one asked me about the music I listen to here in the shoe store.

It was really fantastic. The shoemaker of Lamia to listen to the "Barber of Seville"!
στις 2:16 μ.μ.